At Hendrix College, on new student move in day, we have a number of stations in our Student Life and Technology Center setup for getting ID cards made, getting your post office box, and for configuring student devices to the Hendrix network.

And seemingly every year, I find myself banging my head against a desk, because I forgot to create a survey instrument to capture the devices that we were helping new students configure as they come to campus.

But not this year. This year, I remembered, and created a simple Frosher Move In Survey.

The instrument is pretty simple. Each survey page represents a single student, and each block on the page a device. We wanted to capture important pieces of data, without impeding overall flow of handling all of our new students before they had to be at new student convocation in the afternoon. So, the survey had to be concise, simple, and straightforward.

The instruments were completed by our student workers, who assisted new students as they configured their devices. We had gone over the process of filling out the surveys the week before in a “boot camp” that we conduct each semester.

How good was the data that we ultimately collected? Well, I’d say, OK.

The instrument did extremely well at capturing device type and OS, less well at capturing OS version, and just plain poorly at capturing data plan. I attribute the failings on the instrument mostly to the need to better train our student workers to ask for (and understand) data and text plans. But in fairness, maybe we should just drop those two questions off in the future. At any rate, those two data points ultimately proved to be unusable for anything useful, owing to the spotty collection of the data.

Below, I present the data we were able to collect, with some caveats.

First, this data does not represent all devices students use on campus, only those devices that we helped them configure. Anecdotally, we answered several questions regarding “smart TVs” and gaming devices. We had previously sent students directions on setting up devices themselves onto our wireless network, and so many had already done that. And, for those students who simply had a desktop PC, they just plugged the thing in the wall and were good to go. We know also that there is a broad mix of Apple TVs, Rokus, and gaming devices going into student dorms, because we watched them go in as they were being carted from their cars.

Our data represents devices we directly assisted with during the check-in process in the Student Life and Technology Center. In total, we helped about 1/3 of the incoming class with their devices (our HelpDesk would probably agree that we have since helped the other 2/3 with their devices, looking at our logs!).

In short, our data should not be used to say what precisely new students are using on our campus, but can certainly be used to indicate preferences and trends. In order to truly understand exactly say what is hitting our entire network, we’ll need to look back after the first week, to get an accurate device census.

In the future, we’ll refine the instrument, and perhaps have the students self-report a second instrument, to see how they compare. But that, as they say, is a different task for a different day.

With the preamble out of the way, here is what we saw.

I think the word that comes to mind when looking at the All Devices data below is “mobility.” Phones predominate, followed by laptops, tablets, and everything else (with PCs being the small minority). Again, remember that PCs usually are just plugged into the wall, and may be underrepresented – but I think the trend is clear.

To me, the one really surprising device that I didn’t see at move in was a Chromebook. I would have at least expected to see one out the hundreds of devices we configured, given the emphasis Google has placed on K-12 education. When I go to the local middle and high schools in the area, I see them everywhere. Maybe we’ll see a few “in the wild” when we poll actual network traffic this week.

And a passing note – we didn’t see any wearables come through our line. Not surprising in some cases – with Google Glass being a $1,500 device. Still, next year I wouldn’t be at all surprised to see this category of devices amply represented.

The Computers data was the most significant to me. Anecdotally, when I first arrived at Hendrix in 2011, we configured maybe 1 Mac in every 3 computers that we assisted on new student move in day. Now, MacBooks predominate over all other laptops, and over PC laptops and desktops combined. Again, this data underrepresents desktops already setup in the dorms. But the likelihood of our students having both a desktop and a laptop is low. Given the high numbers of iOS phones and tablets our new students have, and from our raw survey data, I believe this aptly represents the tight coupling of the Apple device ecosystem; if they have an Apple computer, they most likely have an Apple Phone and / or a tablet. The converse absolutely can’t be said of owning a Microsoft PC, and being predisposed to owning Microsoft phones or tablets. 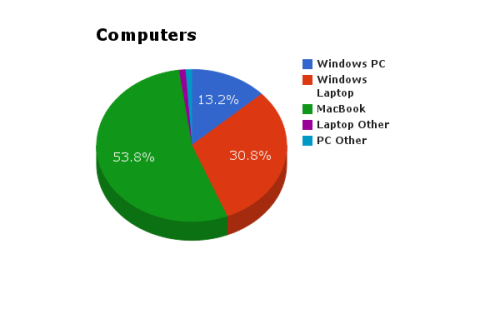 The Tablets data was surprising to me, only in that Microsoft tablets (Surface) had a slight edge over Android tablets. Just from my personal walking around on campus, I had not seen a student carrying a Surface (though several of our staff own and use them).

The Phones data is surprising, because it is counter to the larger phone market (where Android predominates). Does this mean that Apple device owners simply need more help, and Android users are more self-reliant? Does it say something about our student demographic? One should be careful projecting too much, but it is an interesting finding.

And finally, I present Devices per Student. This will seem very low to those of you working on college campuses, and you will be right. Remember, this data is just for devices we helped configure in our move in process, and does not account for devices setup by students themselves or already plugged into the wall in their dorms.

I hope this data is of interest to you, gentle reader, and would welcome your comments, concerns, and suggestions on how we might do a better job next year.