In fact, on at least two customer service calls I’ve made in the last two weeks, I’ve been proffered a survey, before I even get to contact a rep.

In fact, I suggest that the overuse of customer service surveys is akin to the misuse of antibiotics in fighting infections – after awhile, a certain immunity builds up, and before you know, surveys are totally ineffective.

Go to a dealership, and buy a car. Before you leave the lot, you are asked to rank the interaction for J.D Power and Associates. Anything less than a perfect ranking is a black eye for the dealership. So, you are instructed that by your salesperson, and asked to vote them a 10. Teaching to the test, as it were. I therefore hold the Power awards to be pretty useless, because they describe nothing about the excellence of the actual customer interaction, only in how well dealers – and anyone using the ranking – game the ranking process.

For an example in the sharing economy, look no further than Uber. I love Uber – and use it regularly. After each ride, you are asked to rank the experience. If drivers average experience rankings fall below a 4.0 out 5.0, they are sanctioned. Regulars know this, and so will rank even average rides as 4.0 so as not to screw the drivers. In other words, the ranking holds no substantive meaning in terms of describing – and improving – actual customer experience; it’s a waste of everyone’s time.

My local cable provider, Optimum, does an exceptional job at customer experience. In fact, their video explaining customer’s first bill is one of the best customer-facing tools I’ve seen in a long time. However, even their techs will push you to rank them highly, when the inevitable survey is sent.

I don’t blame those being ranked for gaming the system. It’s what I would do.

Rather, I would ask companies – are your customer data collection instruments actually improving customer experience, or are you simply providing a mechanism for collecting information for punitive action against those being measured?

If the answer is the latter, you’re doing it wrong.

I “get” that surveys and self-reporting are often the only way to get at some of this information.

But companies should not advertise how they are teasing these metrics internally, to prevent gaming of the system, and to obtain data that is actionable and unbiased, rather than having the customer pre-fed insincere answers that they should supply, regarding their interaction.

Otherwise, it’s only an exercise in self-delusion: customer service theatre. 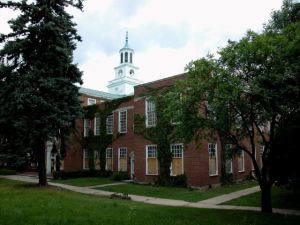 Photo from IHE article. Not sure where this is.

Inside Higher Ed ran a column yesterday on a plan to overhaul a hypothetical small college.  In “The State of St. Bridget’s, July 2017” Aden Hayes describes this plan in detail, including a queen sacrifice move.

These are putatively “fundamental changes”, also known as “streamlining”.  They include a variety of practical steps to save and/or generate money: outsourcing some operations; selling a campus building; entering a purchasing co-op with other campuses; going after adult learners; going after online students; joining a library consortium.  I note the canny shift of overseas attention from Britain to China.

We have closed two academic programs that had been underenrolled for years — including the interdisciplinary program in Northeast Studies, which competed directly with a similar program at the nearby state university. Three departments had their…

There’s information and then there’s too much information, or TMI as it’s commonly referred.

In a news release announcing the appointment of its new chief marketing officer, HubSpot, an inbound marketing company, surely crossed into TMI territory with its diatribe disguised as news.  The release –which delves into reasons for the new appointment (ethical violations) – sounds more like a police report than a progressions release for an incoming executive.

Given their industry prowess, it’s hard to believe that HubSpot’s leadership would allow so many sordid details to be released.  Sure, it shows their board acted quickly to remove an employee they deemed potentially harmful to their brand, but did they consider how harmful it may be to air all the dirty laundry while they were at it?

News releases can still be a powerful tool to tell your company’s story, just be mindful of which…